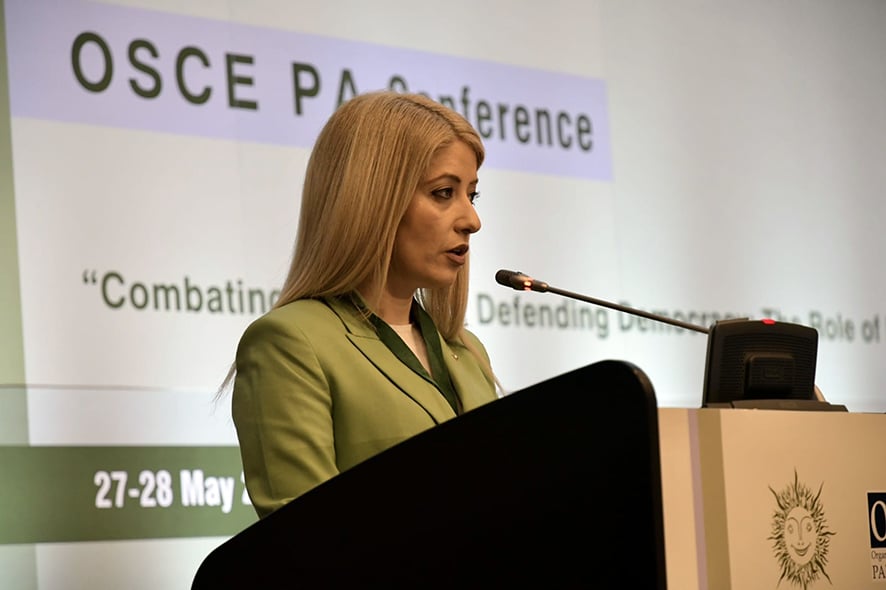 Conference on “Combating Corruption, Defending Democracy: The role of National Parliaments” - Welcoming address by H. E. The President of the House of Representatives, Mrs Annita Demetriou

Your Excellency, the President of the OSCE Parliamentary Assembly,
Honorable Ministers,
Distinguished Members of the Diplomatic Corps in Cyprus,
Dear guests,

It is an honour and a great pleasure for the Cyprus House of Representatives to host an International Conference on such an important theme, gathering so many parliamentarians from OSCE participating States and Partners for Cooperation. I wish to particularly thank Cypriot officials from independent state institutions, representatives of international organisations leading anti-corruption efforts, as well as NGOs and investigative journalists with expertise in the field for their presence here today and for their significant contribution to our debates. First and foremost, my warm thanks go to the OSCE PA Vice President and Special Representative on fighting corruption, my dear Colleague, Irene Charalambides, for her initiative to bring this Conference to Cyprus and her active involvement in every step of the process.

Corruption ranks high among the main concerns of citizens, particularly youth, leading to their disillusionment, disaffection and abstention from political activity and public life.  As Parliamentarians, we have the imperative duty to gain back our credibility and reliability in the eyes of our citizens. As legislators and guarantors of their rights and interests we must ensure effective oversight to strengthen democratic institutions and to promote good governance, transparency and accountability.

Corruption can have devastating effects on our societies and social cohesion. It distorts markets and competition, corrodes the rule of law, undermines government legitimacy, breeds cynicism among citizens and nourishes populism. What is more, corruption can have a geopolitical impact, when used as a tool by foreign powers to buy influence and to advance their foreign policy agendas.

International organisations play a crucial role in global efforts to combat corruption. Τhe United Nations is monitoring the implementation of the only universal legal instrument against corruption, and has included reducing corruption and bribery among its 17 Sustainable Development Goals. The World Bank made anticorruption efforts part of its programming, the Council of Europe Group of States against Corruption is providing member states with detailed recommendations on how to improve control of corruption, the OSCE is including anticorruption in its field missions programme. The leading NGO Transparency International is conducting analysis and advocacy worldwide, while the international Media report instances of corruption, not without risks, on a daily basis.

The fact that no country is immune to corruption is a painful truth, but certainly not an excuse. Corruption is not an unchangeable reality but rather a task at hand. It is precisely this message that we must communicate to our citizens through our debates and exchanges, benefiting from the experience and best practices of one another.

The three sessions of the Conference aim at highlighting key policies and the different roles of main actors in efforts to combat corruption, including national Parliaments, independent state institutions, international organisations, non-governmental organisations and the Media.  As for all challenges, efforts must be collective and commensurate to the multifaceted nature and complexity of this phenomenon. Greater inclusiveness, transparency and accountability must be our primary incentive and our ultimate goal along this difficult path.

I will not shy away from recognizing my own country’s weaknesses and shortfalls, because this is a recipe for failure. As traumatizing such experiences may be for integral politicians and public confidence, they make us stronger and more determined to find solutions. In the past 18 months, the House has adopted a Code of Conduct for Members of Parliament, legislation on the protection of whistleblowers, legislation on lobbying and legislation for an Independent Authority against Corruption, which has been granted all the necessary powers to successfully carry out its important duties. An authority with its own budget, a unique procedure for the appointment of its members that eliminates undue influence and extensive investigative powers to examine and assess information about possible acts of corruption.

Another Law regulates lobbying by providing that Officials must inform the aforementioned Authority of all meetings they have with persons wishing to be involved in the decision-making process.

Legislation on whistleblowers’ protection places an obligation for the competent authorities to designate independent and autonomous external channels for receiving and managing information, as well as an obligation to process such information.

All three bills, as well as the Code of Conduct, have been the result of a collective effort and of constructive dialogue that took place in an atmosphere of consensus and goodwill beyond party politics.

Obviously, we do not expect that with the adoption of this legislation corruption is eradicated once and for all. But we now have better tools to prevent corruption, to find out about it, to bring relevant cases to justice and also to train our administration to recognize them, so that they can be better addressed.

We are looking forward to more concrete suggestions on possible improvements and I am confident that I will hear some by the end of this Conference.

I welcome you, once again to Cyprus and I wish you every success in your deliberations and a very pleasant stay in our beautiful country.

Thank you for your attention.